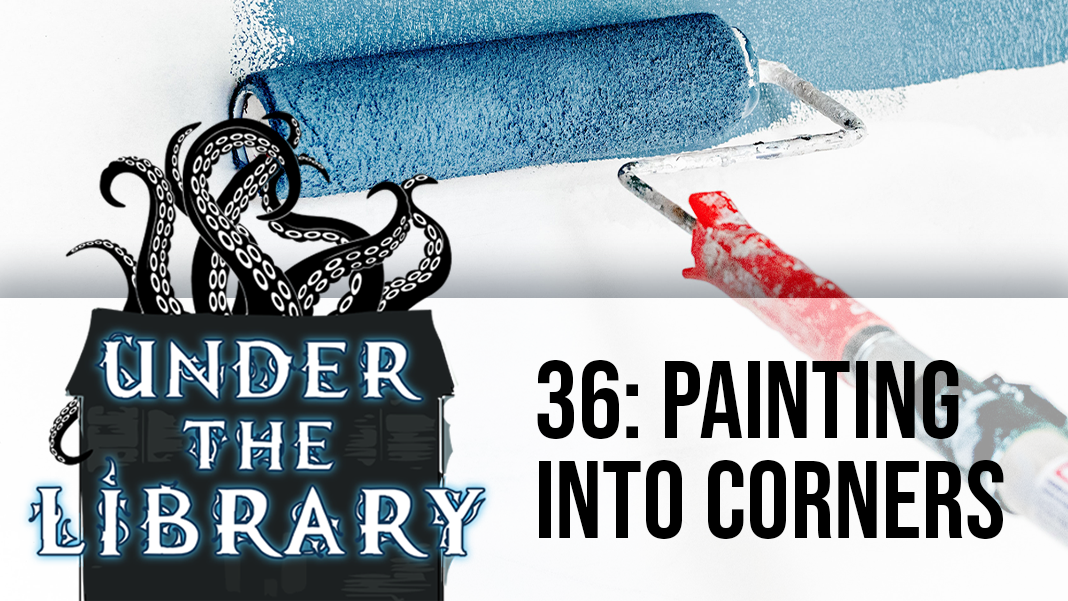 After wrapping up the scenario “A Mother’s Love,” the Under the Library crew embarks on Season 2; a new adventure in 1942 Los Alamos, NM. If you want major spoilers for A Mother’s Love, start from the beginning of the episode. If you’re looking for Season 2, then start after our mid-show break at 29:25.

In this ahistorical version of Los Alamos, NM, the town and government facilities have already existed for a decade. We meet a host of local residents and scientists:

Dick Feimer: An eccentric architect, Dick dresses in fashionable, well tailored, very snug attire. He’s clearly undergone surgery to look younger. Many residents of the town find him odd and avoid him. He designed many of the government laboratories in Los Alamos.

Franny Rumsford: A grad student with low level clearance, Franny works in one of the labs that Dick designed and considers him a friend. She carries on the research that her great great grandfather began.

Rutherford Frengel: A scientist and egghead, Rutherford was Dick’s grad school roommate (and Dick was perhaps his only friend). He worked at a midwestern university but is now more of a beatnik, and settled in Los Alamos.

Culligan McGillicuddy: Culligan is a 15 year old aspiring writer who wants nothing more than to leave the small town of Los Alamos. He records any interesting story he comes across in his notebook. Dick Feimer is a role model and they have a great rapport.

Jo Barnes: Jo is 16 years old and works in the local general store. She lives in a small room above the store and has a contentious relationship with her employer/landlord. She’s from Abiquiu, NM, but refuses to reveal more about her past. Culligan is a close friend.

Franny, Rutherford, and Culligan (with Jo in tow), have gathered at Dick’s house for lemonade and conversation. As they talk a man toils nearby in the heat, working on Dick’s landscaping. Franny invites John Boone to join us. He seems a bit uncomfortable, but eventually settles in and shares his past experiences with the circus, and mentions knowing the magicians Rigatoni and Bologni.

Dick invites his five guests to attend a performance in the local theater by renowned magician Caspar Muscovane. In particular, Dick would like Franny and Rutherford to apply their scientific minds and explain to him the magician’s process of illusion.