Our Call of Cthulhu Podcast: A Ghastly but Likely History #1 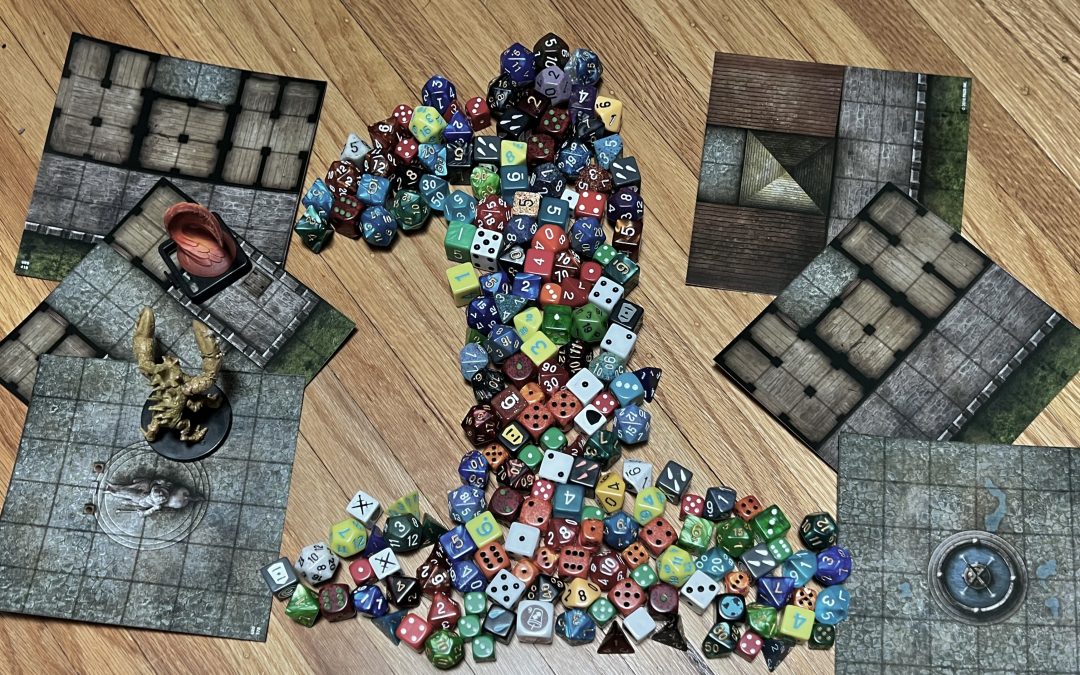 Who the hell are y’all and what gives you the right to be Keeper? It’s a good question. I ask myself that one often, and more importantly what ghastly forces conspired to bring us together. As I try to piece together the answer, I will start by saying, whatever it is that brought together our Call of Cthulhu podcast, I’m deeply grateful.

Wayne is the original GM who brought RPGs into our lives. He’s been at it since Dungeons & Dragons had something that looked like a DIY clay Zuul on the cover.  He began reinfecting his friends in 2011 in the middle of a futon store, and I always respected a couple of things about Wayne’s approach. The first, he never made anything easy because the challenge was fun and character sheets were made to be used. Secondly, he was never scared to throw out rules in the interest of story. In fact, he taught us through example, that rules are suggestions and if they’re getting in the way of your story just ignore them.

For most of Under the Library that was our introduction to RPGs. We didn’t all play (ahem… me), some of us sat around snacking on cheez balls, stretching out on a double plush/latex/foam core mattress, watching a dragon box kite float float across the ceiling, and soaking in the camaraderie. Wayne was tough on the meta gaming, once something was spoken it was done, and there was a hard push to train the players to perform in character.

Aside from Chris, who had his own, dog-eared PHB and legit degree from puppetry school, these were new concepts. As a result, it took a long time to convince us that Bundt’s bumbling dexterity was a far more interesting trait than the shiny sword in the back of the cave.

Sitting table-side I began to understand the draw of this 80s basement phenomena, the community it built for players, and the incredible story being crafted in the moment. The collaborative productions, world-building, and performance were rich mines of joy and ideas. Often I would find myself feeding off the energy, on one helluva comfy futon, writing away like a creative succubus (if only it were that easy). And week after week the group would come back, sometimes a guest would drop by or someone would be pulled away or just not grok the process. It became apparent though that a core group was yearning for more.

Somewhere in the muddling of moments Art, Rick and I would take our hand at being GM on different nights (Wednesday at the Futons N More was sacred), crafting one-offs, hotly debating the merits of systems, notes on storytelling, and coming up with things for Scott to kill. I was also taking an improv class and in preproduction for a film. It’s probably worth noting during this time that we tried a lot of board games that we thought might scratch the itch (Imperial Assault, Conan, Zombicide: Black Plague), but we always quickly yearned for the freedom to build our own characters and make our own worlds.

It was in improv that I met Emily. It was a derelict group of youth and retirees guided by John Forrest Thompson (who is a GM of sorts in retrospect) to explore the macabre and humor bustling under the surface of interactions. Emily and Chris joined on for the production of the film and as the demands of post production and a newborn consumed my world, Chris (who’s keen nose detected Emily’s emanating nerd scent) was gradually inducting her through bizarre rituals of Ten Candles and Pompeii at “The Barn”.

These friendships have always been the spirit of our game nights and there’s always an excitement, as each night seems to be an evolution in the process. The podcasting is only possible because of having an Arthur who’s an Extreme Success on all of his sound rolls, but the life of our roleplaying comes from this trust and belief in each other as collaborators. It’s also what inspires me to build the best possible scaffolding for our world. As far as being Keeper, I don’t feel my role is any different than the players. I’m just trying to build the best possible world with them, and we’re all equally responsible for it.

What you’re listening to is truly a group effort, and we’re all working together to tell the best story we can. I mean sure, sometimes I want to kill the chicken man and Emily usually wants to kill me. The reality is though the NPC on the bench is only there because someone saw him, he only has voice because someone else confronted him, and now I have to decide his contribution to his world. The players will decide whether he has value.

Roleplaying is fun. It’s supposed to fun, and challenging, and rewarding. Most of all though, when it’s at it’s best it makes us laugh, sometimes cry, and brings us closer together. I’m so excited and feel so damn lucky on Thursday nights. Signing off now, I’ve got some chicken to go fry.

Notes from the Keeper is Michael’s periodic musings on our Call of Cthulhu podcast. If there’s something you’re curious about or want him to talk about, feel free to reach out at itsunderthelibrary@gmail.com