Call of Cthulhu #2: A Tenacious Reflection on My First RPG Love 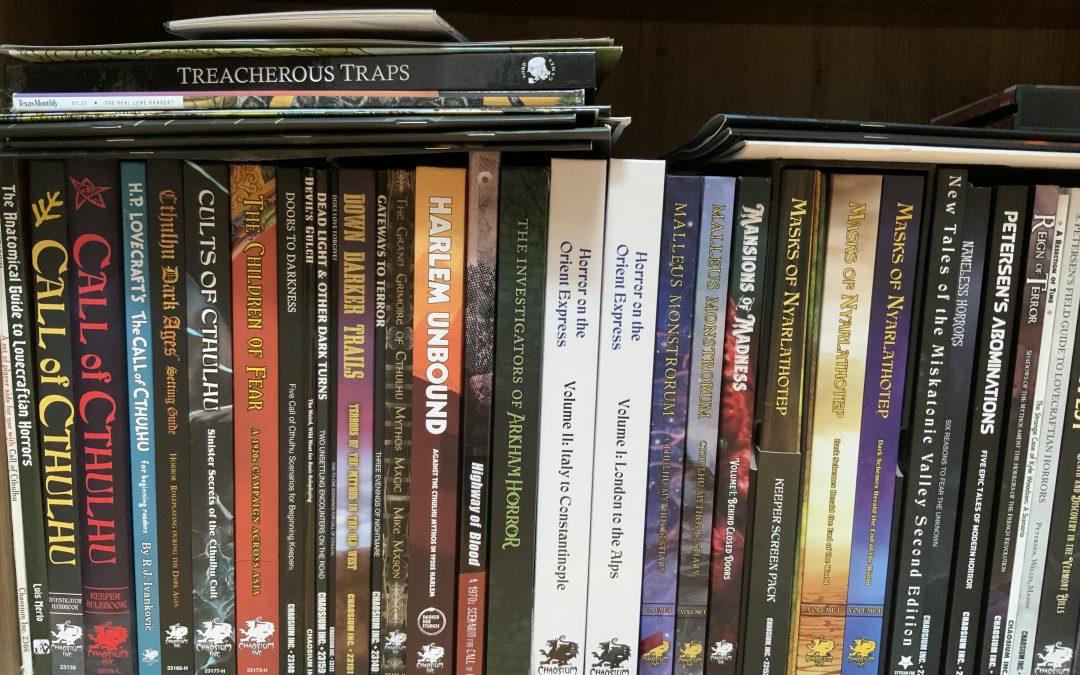 This post is about Call of Cthulhu, but there’s no avoiding it, Dungeons & Dragons was our gateway RPG, and Rick still hosts a weekly game of it. It was on these nights I picked up most of my GMing by osmosis in the futon store when Wayne would let me peek behind the Game Master screen. It piqued my interest and started to lure me with what kind of world I could build.

Since there was already a rollicking D&D session every week (and my propensity for variety) I set out to explore different RPGs. My first priority was the Weird West (more on in a later post), which quickly led me to Savage Worlds. Deadlands was experiencing a resurgence, and it really filled my content desires and was a small ask in terms of a PHB (player’s handbook) for the players. Everyone was on board, and we spent a year bouncing around somewhere west of Nevada in a home brew. It was a ton of fun and then TPK (total party kill) happens.

I replaced the homebrew with a module and we were off. It was a disaster. The module was a train track through the weird west. I felt my only role as a GM was to coerce the group to the next chapter, have an encounter, repeat. The group was also clamoring for more D&D. Not having the time to build a new world I shelved Savage Worlds and cracked open Tomb of Annihilation.

I had a wall size map printed, bought more miniatures than even my kids want to play with, and went through three versions of tabletop terrain. We had a ton of fun in the forest and then we arrived at the tomb. Most of the group didn’t like puzzles, and I realized we were going to be churning through PCs left and right. My buy-in had vacated, and if you’ve ever played an RPG with a disengaged GM it’s not pretty.

Wayne’s D&D continued, Nick picked up another night, and I experimented more with board games, then Covid. Nick had already moved online, and that group didn’t miss much. As I heard back from Nick (and Roll 20) I realized I had relied on so much tabletop paraphernalia, navigating miniatures, lining up terrain and endless rule books, that I always felt burdened as a GM.

Somewhere on this timeline we played Stephen Dewey’s Ten Candles . I had never had so much fun around a tabletop. We laughed, we freaked out, we screamed, and everything was built in the moment. There was truly no prep, no miniatures, no counting squares to figure out how close the lurker was, and from the beginning, a guarantee we would all die. I yearned to figure out how to recreate this energy weekly.

During isolation I started pouring through RPGs and games looking for my Holy Grail as a GM. I wanted real horror, difficult decisions, and room for the narrative to squirm in any direction necessary. In the Indie world there are some real standouts: Dogs in the Vineyard, My Life with Master, Bluebeard. Though they technically had their own system they were based on a specific set of actions, and I was looking for something more malleable.

A few weeks later, from the front seat of the truck, by flashlight, in an RV park, we embarked on our first Call of Cthulhu adventure. There was no tabletop, no PHB, and a guarantee that the outlook was grim, but all of the potential was there.

We’ve spent a couple of years within Call of Cthulhu, and the more we explore it, the more I love the system. We’ve played one-offs, campaigns, and built our own sandbox. It remains, for me, the most adaptable system that I can explain the rules to a new player in 5 minutes.

While the quick explanation has it’s obvious benefits it also fits with our gaming priority, storytelling. With CoC I haven’t been bogged down with counting spaces, moving miniatures, or a player having to decide between their 8 spell slots. There’s no sifting through dice. At Chaosium Con I GM’d a table for someone who hadn’t played in 20 years and her son, who had never played an RPG. They never missed a beat.

Everyone is engaged with their character because they don’t have to worry about justifying a rule or deciding how to meta their attack. Attacking often comes with greater repercussions than a more creative solution. And even when a player fails a roll, it doesn’t necessarily fail. The success just comes with consequences.

The ruleset is built for maximum player immersion, and since the PCs are fragile humans there’s no expectation for success. In truth, rather than having to challenge the players, as Keeper you usually find yourself in the position of making a moment less lethal and more epic. The result is less adversarial and more collaborative in how you build the story. And when a PC does die, which happens often, there’s no resentment from the player.

It does come with a cost of GM (Keeper preparation), however the payoff makes it all worthwhile. It makes it easier that I obviously have a lot of love for Call of Cthulhu. It’s a system I love to build worlds in, and each session I learn a little more and it challenges me to be a better Keeper. The system works for our group because character development is a priority on Under the Library nights. It’s worth noting that a lot of the group still has a D&D night, which satisfies a different itch.

Call of Cthulhu is the ruleset that works for us though. It doesn’t matter what we’re battling or attempting to discover, the ruleset frees us up to engage in improv story building. It makes our podcast work and brings out the best in us, and through Call of Cthulhu we build our stories together as players and keeper.

Notes from the Keeper is Michael’s periodic musings on our Call of Cthulhu podcast. If there’s something you’re curious or want him to write about, feel free to reach out at itsunderthelibrary@gmail.com